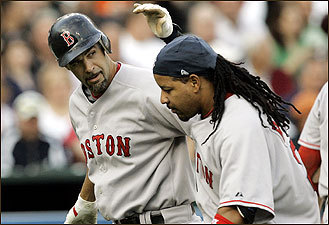 Well, those of you who answered my question of yesterday, "Which will happen first: Manny Ramirez hits his 497th home run or Mike Lowell drives in his first RBI of 2008?" Mike Lowell, you were correct.

Lowell went deep for the first time in his first at-bat in Detroit last night for his first homer and two RBI of this season in leading the Sox to a 6-3 win to extend their winning streak to four and six out of their last seven. He also had three hits, and came up just a triple short of the cycle.


Daisuke Matsuzaka had lots of problems with his control, as he walked 8 in five innings, but allowed just one run on two hits. Kevin Youkilis and David Ortiz both went deep as well to pace the Red Sox attack.
Posted by The Omnipotent Q at 10:21 AM