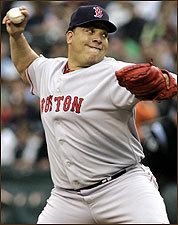 The Red Sox got a splendid performance from Bartolo Colon (pictured) in his second Red Sox start. He sure looked like the Colon of old as he went seven innings and allowed just one run. He was consistently hitting 95 and 96 MPH on the radar gun. But for a long time last night it looked like he might come away with nothing.

As for the third game in the last four, the Red Sox lineup was retired in order for the first three innings without a man reaching base. It reached 11 straight last night before David Ortiz put an end to it by taking Felix Hernandez over the centerfield fence to give the Red Sox a 1-0 lead.

But the rest of the offense was silent through the seventh. Seattle tied the game at 1-1, and it had the makings of another game the Sox would lose without getting more runs. The Mariners had opportunities to score more, but couldn't cash them in, thanks to Colon.

But the Red Sox finally came through in the eighth, scoring four runs as Hernandez finally faltered. It stayed 5-1 until the bottom of the ninth, when Jonathan Papelbon, whose been doing a "tightrope act" a little too often lately, allowed two runs on his own error, a wild pitch and a couple of hits. But the Red Sox finally had the win, 5-3, and it ended their seven-game losing streak on the road, and it gave Bartolo Colon his second straight win.

A couple of random observations. I loved those shin guards and chest protector that Jason Varitek wore last night. They were camouflage, to honor the military and the fallen soldiers on Memorial Day. Nice touch, Tek.

Also, have you noticed there's a guy who sits behind the visiting dugout, a few rows up from the field, wearing this enormous "BOSTON SUCKS" shirt? I remember he was at every Red Sox-Mariners game at Safeco Field last year, and always wore the same shirt. He's on TV all the time, when they show the close-up of any righthanded batter in the batter's box. He's got to be a Mariners season ticket holder or something, as he's in the same seat for all of the Red Sox games. I just found it unusual seeing that in Seattle, as normally you'd find them in the Bronx or Baltimore.

And I also noticed that when the Red Sox had scored the four runs in the eighth, the "Boston Sucks" guy had mysteriously vanished. What a shock.
Posted by The Omnipotent Q at 10:51 AM