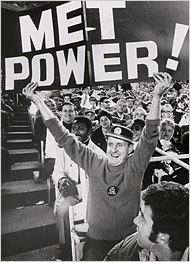 I was saddened to learn on Friday night that Karl Ehrhardt, the one-time fixture behind the third base dugout at Shea Stadium for Mets games from 1964-1981, passed away at his home in Queens at the age of 83.

Mr. Ehrhardt was always at Shea from as far back as I could remember as I was growing up with the Mets. The one-time Brooklyn Dodger fan and World War II German prisoner of war translator seemed to have a sign at the ready for every occasion and for almost every situation. I will remember fondly some of the signs he held up during the 1969 World Series, such as when the Mets were about to wrap it up, he held up at the Baltimore Orioles: "Bye Bye Birdies" and when Cleon Jones caught the final out of the Series and the Mets were the champions, an appropriate one went up: "There Are No Words."

A nice article about Mr. Ehrhardt appeared in the New York Times two years ago about his run at Shea as "The Sign Man":
http://www.nytimes.com/2006/06/18/sports/baseball/18cheer.html?_r=1&oref=slogin

My sympathies to the family and friends of Mr. Ehrhardt, and my thanks to Metsblog.com for a nice tribute on their site to "The Sign Man."

One Of Karl's Signs, razzing Ed Kranepool, was "Superduperstiff", as he could also be a critc as well:

"Sic Transit Gloria Mundi" or thus passes the Glory of The World;

& I do remember all those signs;

Eberhardt did them from The Heart, while Charlie O's Oakland A's, actually hired someone in the '73 World Series to be a "Sign Man Clone";

I remember many Mets players didn't like him because of some of those "less than kind" banners Karl Erhardt would hold up, and Kranepool was one of his louder critics.