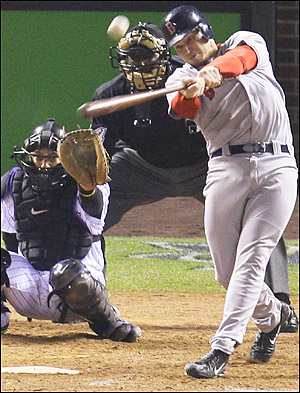 So Kielty's return to Boston opens new speculation that Crisp will be dealt before the season starts. Gordon Edes, in Tuesday's Boston Globe, said there is no trade involving Crisp that is imminent.

I like the fact Kielty will be back. He's a good outfielder who can play all three positions and hits left-handed pitching extremely well. Coco was superb in center last year, but the future there is clearly Jacoby Ellsbury. Ellsbury has had a history of injuries, so keeping Coco might be a wise move. Even if Ellsbury stays healthy, Terry Francona would still find a way to get Crisp 300 at-bats.
Posted by The Omnipotent Q at 11:51 AM

I'm really sorry to hear you're not doing too well, Kaylee. Hang in there...we're all pulling for you, and your always in my prayers...

It wouldn't be a wise move because Coco would be pissed. I don't think he'd pull a Jay Payton, but I don't see keeping him on the bench "just in case" to be in the best interests of the Red Sox.

I'm sorry you're not feeling well, Kaylee..my thoughts are with you!

I would trade Coco, MCW, as he has lots of value, doesn't make a ton of money, and many teams need a CF. And the Sox can upgrade their bench or bullpen if they move him. But time is being to get short...