Now Give Someone Number 21 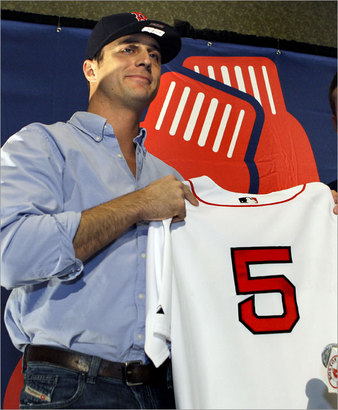 Rocco Baldelli was introduced to the media yesterday with his new Red Sox jersey, which just happens to be number 5, which he wore at Tampa Bay. (Remember the Joe DiMaggio comparisons when he first came up?) That number has not been worn by any Red Sox player since July 31, 2004, when a player many thought would have that numeral retired one day wore it: Nomar.

I'm not really bothered by Baldelli wearing 5. It was time to move on, and I'm sure Garciaparra isn't bothered by it either. And I hope Rocco gets his career back on track in Boston.

But what has mystified me for years is why no one has worn number 21 since 1996. I won't mention the jackass who wore it, as we all know who he is. The Yankees gave away his number right after he left them in 2003, and I actually applauded them for doing it.

Now that the Texas Con Man's legacy is deep in the toilet (a hospital in Texas just took his name off their building recently) and the Hall of Fame is almost out of the question, I think it's time the Sox gave someone on the club the number. TCM has disrespected the club and its fans for too long, and I can't think of a better way to give him the screws than to give number 21 to some young player, even the 25th guy on the bench. (Or how about giving it to some really young player in spring training, who probably wouldn't come up for a few years?)

It's really time the Sox turn the page on the Con Man and his evil legacy by starting a new one with a new player. Time to take 21 out of mothballs. It's been too long.

In other Red Sox news, they arebringing back Mark Kotsay, as a backup first baseman and outfielder, and at a bargain basemane price of one-year at $1.5 million. Kotsay wanted to start for another club, but found that the market had dried up and the Red Sox were a better alternative. Another nice, solid, veteran move by Theo Epstein.

Also, my friend Darren has a cool post about how the Hall of Fame rejected his offer of one of Claudia Williams' paintings for the Hall, which he acquired last year. (She is the daughter of Ted.) Check it out here.
Posted by The Omnipotent Q at 1:06 PM