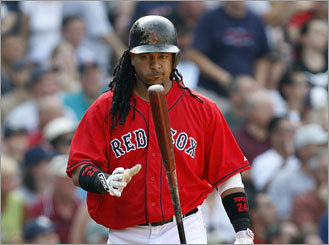 Another game with the Yankees on Saturday, another lousy loss.

It started off with some promise, as the Red Sox scored two runs in the first, as David Ortiz singled in a run, and Manny Ramirez knocked in another with an RBI groundout.

But the lead wouldn't last, as Tim Wakefield gave up runs in the third and fourth, and the Red Sox wouldn't get the lead back. J.D. Drew hit his 19th home run, but other than that, it was a listless, lifeless loss. A fire has to get lit under this offense, as even with the return of David Ortiz, they look sluggish and lethargic.

Justin Masterson relieved Wakefield and didn't get anyone out. Craig Hansen again looks like he has no business being in the majors, and allowed three runs in the eighth, with the Red Sox down by four at the time. It wound up a 10-3 New York win. (And the biggest cheer of the day came when Hansen plugged Slappy on the elbow with a pitch in the eighth. It was that kind of day.)

And now the Sox need a win on Sunday night just to avoid a sweep at home. Dammit.

The Manny Ramirez saga continues, as the Curly Haired Bastard at the Boston Globe said today that Sox are fed up with Manny and are exploring a possible trade at the deadline this coming week. I honestly don't believe it will happen, as the Red Sox can't get anywhere near Manny's value. And with all the tomfoolery going on with him now, who would want to take him on?