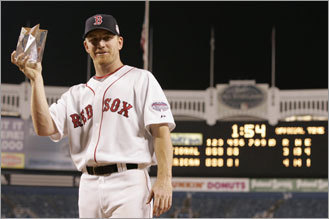 The longest All-Star Game in history was played last night at that dump in the Bronx that has a date with the wrecker's ball after this season. The American League came out on top, 4-3 in 15 innings on Michael Young's sacrifice fly to score Justin Morneau with the winning run. (Reminded me of the Sid Bream play that won the pennant for the Braves in 1992.) J.D. Drew was voted the game's MVP, as he hit a two-run homer in the 7th inning to tie the game at 2. (Isn't that a great picture of him? I love it when Red Sox players do well at that joint. The last All-Star Game at the alleged "Cathedral of Baseball" and the MVP award was won by someone on the Red Sox. Sweet.)

The game took five hours to play and featured all kinds of action, especially in extra innings, like the NL getting out a bases loaded, no outs jam in the 10th, and the AL getting a runner thrown out at home. Both teams ran out of players (Drew came up to bat 5 times), and Scott Kazmir pitched the 15th inning (after going last Sunday) to get the win.

Once again Terry Francona gets an All-Star Game win, and you know what that means: Game 1 of the 2008 World Series will be played at Fenway Park this year. (I wrote the same thing last July, so don't get nervous. I love being optimistic.) The AL is now undefeated in the last 11 All-Star games. (10-0-1, including that travesty that happened in 2002 with that game that ended in a tie. It would have been interesting to see if the game had gone to say 18 innings, or beyond. You can't halt it, because as we all know, "This time it counts!!")

Some other observations about the Midsummer Classic:

A pox on Wade Boggs for showing up to the opening ceremonies wearing a Yankee hat. (I thought the ceremonies were well-done by the way, with the Hall of Famers at their positions in the field with the game's starters.) He's in the Hall of Fame as a Red Sox player, as he was identified in the graphic. Both Gary Carter and Dave Winfield wore the hats of the teams they are in the Hall with, but also brought a long a second hat of the other major team they are associated with (Carter a Mets hat, Winfield a Yankees hat). Boggs will only be remembered for what he did in Boston, and I'm sure a lot of Red Sox fans like me didn't appreciate it. All anyone will remember about Boggs' days in New York is is that he rode a horse on the field after New York won the 1996 World Series. How appropriate for a total jackass.

Did you see George Steinbrenner in the cart getting the royal treatment at the end of the ceremonies, being driven around the field? He looks like an ad for death, and even worse than I would have thought. He was shown bawling as he made his way around the park. Looks like whoever set it up was ripping off the tribute to Ted Williams from the 1999 All-Star Game.

It was just so great to see the large contingent of Red Sox players who saw action, and Terry Francona managing the team from the Yankees home dugout. And as the game went deeper into extra innings, there wasn't a single Yankee player in the game, and J.D. Drew was still in the game for the AL. Almost surreal.

When is MLB going to stop scheduling this game so late on the East Coast? 8:40 PM is WAY too late to throw the first pitch. The ninth inning didn't happen until after 11:30 ET, and many people in the East can't stay up for it, especially the younger ones. (Same goes for the World Series. Many kids in the East have never seen the finish of a World Series or All-Star Game.) MLB continues to slit their own throats with these start times. I hear the excuses for having it at the time they have it and usually involves the West Coast. Hey, if you're a true fan out West, you get to see all of the game and it will end at a good hour. It all revolves around ratings points out West, and it annoys me. They talk about an "East Coast bias" in baseball, well this is one "West Coast bias" in my opinion.

Jonathan Papelbon (along with all of the Red Sox players) got a rude welcome in Yankee Stadium (big shock, eh?). The asshole New York media played up that statement Pap made on Monday about wanting to close the game, but eventually deferred to Mariano Rivera. (Funny, Rivera said the same exact thing about wanting to pitch the ninth and even stronger than Pap. Of course, Rivera's their boy, and can walk on water in their eyes.) So unlike the NY media to print lies, right?

It was also simply appalling that Pap and his wife actually got threats from some moronic Yankee fans over this crap. (What else do you expect from these muttonheads, America's worst sports fans?) Terry Francona, to his great credit, was going to have Rivera pitch the ninth no matter what, as he knows how to handle situations like this and has a sense of doing the right thing.

Never ceases to amaze what total putzes the New York sportswriters can be, creating ersatz controversies to sell newspapers.
Posted by The Omnipotent Q at 11:14 AM