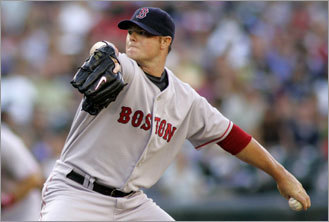 Jon Lester (pictured) gave the Red Sox 7 1/3 solid innings last night in Seattle and picked up his 8th win of the season as the Red Sox ended a three-game losing skid with a 4-0 win over the Mariners.

Lester was superb, and until the eighth inning, was never in trouble. He scattered eight hits, struck out six, and walked no one. His sinker was terrific all night. He loaded the bases in the eighth with one out, but Jonathan Papelbon came on to get Raul Ibanez to hit into a DP to end the threat. He finished off Seattle in the ninth with no problem for his 29th save.

The bottom of the lineup, not noted for their prowess at the plate in recent weeks, did all the damage. The bottom four spots went 13-for-19, and Jason Varitek slammed a two-run shot in the fifth, and Jed Lowrie singled in two runs in the eighth to make it a 4-0 game.

But the star of the night was Lester, who got the Red Sox a much needed road win, just their third in the last eight games away from Fenway. They kept pace with Tampa Bay and New York, who both posted home victories.

And David Ortiz continued his rehab at Portland last night, going 2-for-3 with a walk in the Sea Dogs 8-2 win over Connecticut. Papi was kept in the yard, but he once again reported no problems with the wrist after the game concluded.
Posted by The Omnipotent Q at 10:48 AM