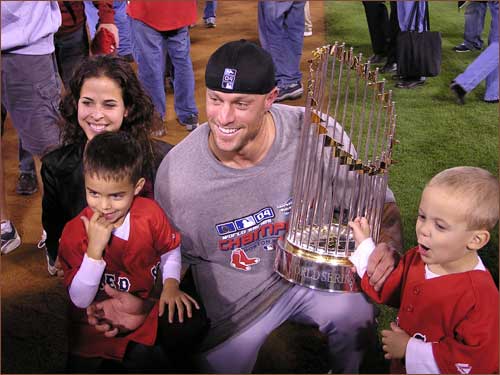 Lost in all the hullabaloo over the signings of Daisuke Matsuzaka and Julio Lugo, and the signing (one of these days) of J.D. Drew, Gabe Kapler announced his retirement from major league baseball after nine seasons with the Detroit Tigers, Texas Rangers, Colorado Rockies and the Red Sox, at the young age of 31. He was originally selected in the 57th round by Detroit in the amateur draft in 1995. Kapler leaves the game with a career of 64 home runs, 302 RBI, .270 batting average and 68 stolen bases. His best season was as a regular for Texas in 2001 when he hit 17 HRs, 72 RBI, and hit .267.

Kapler had offers from other clubs to continue his playing career, but declined them all to take over as the manager of the Greenville Drive, an "A" ball club affiliated with the Red Sox.

Kapler said that his decision was an easy one, that early in 2006 as he was rehabbing his Achilles injury from September 2005 he felt he could be of better use teaching young players on the way up, as he spent time in the minors before rejoining the Sox in June.

Kapler made an immediate impact with the Red Sox fans in mid-2003, as he was picked up off waivers from Colorado. He had four hits in his first game and then hit two home runs in his second game in Boston. He immediately became something of a cult hero, and the fans immediately took to his dedication and hard-nose style of play. (Remember he was in the middle of the brawl with the Yankees in July 2004?)

After the 2003 season, Gabe was offered a two-year deal by the Milwaukee Brewers, and a chance to play regularly there. He turned them down, citing the fact that he was so taken by the Boston fans that he would rather be a fourth outfielder in Boston than a regular in other cities. He also pointed to the fact that he thought the Sox had a good shot a world championship and wanted to be a part of it should it happen in Boston.

Hearing that made me a Gabe Kapler fan for life.

I'll never forget that he put away the first out in the ninth inning of Game 4 of the 2004 World Series. Of course, many Sox fans will remember that unfortunate injury he suffered rounding the bases in Toronto in September 2005. It was feared that the Achilles injury he suffered could be a career-ending one. But Kapler fought his way back, and came back months ahead of schedule. He hit .254 in 130 at-bats, but the fact he made it back at all is a tribute to his love and dedication to the sport.

After winning the World Series in 2004, Gabe attempted to jump start his career in Japan with the Yomiuri Giants, but he had an injury-riddled half-season there, and made the decision to return to the States. Of course, with the Red Sox. Kapler seemed to have a deep appreciation of what it meant to wear the uniform of the Boston team, and his decision to remain in the Red Sox organization is a testament to that.

Gabe and his wife Lisa also founded "The Gabe Kapler Foundation," which attempts to end the cycle of domestic violence. Lisa was a victim of violence at the hands of a boyfriend many years earlier, so she and Gabe formed the foundation in 2004. (It can be found online at: www.kaplerfoundation.org.)

So, in retirement, I wish Gabe Kapler and his family all the best, especially as he starts his new career as a minor league manager. I hope to one day see him manage in the bigs. He'll always be one of my favorites, and not just because he's "One of the 25."

Gabe is just good people. And baseball can use all Gabe Kaplers it can get.
Posted by The Omnipotent Q at 11:42 PM

Hope you have a beautiful New Year, Quinn!

Have a great New Year, Christine and Kaylee......