Another Day, Another Win, Another Injury 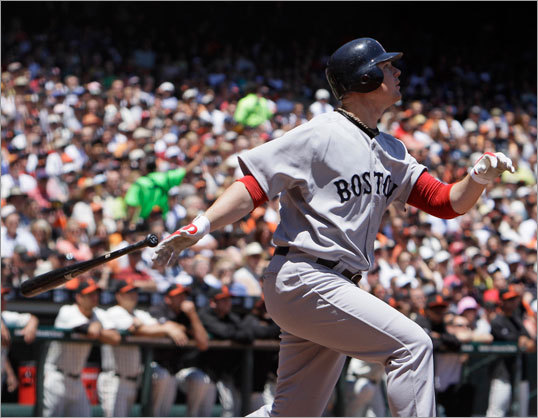 Good Lord. Can we have a Red Sox game where no Sox player gets hurt?

The Sox took two out of three from the Giants in San Francisco this weekend, as Jon Lester was superb, going the distance in a 5-1 win. But this weekend, the club paid a heavy price, losing Dustin Pedroia, then Clay Buchholz (don't get me started on that injury, but it doesn't appear to be serious), and now, Victor Martinez has a fractured thumb.

In the second inning, he took what looked to be a ball off his foot on a foul by Pablo Sandoval. He hopped around in considerable pain, but he stayed in the game. But finally, in the fourth, he left the game and Jason Varitek came in. It wasn't a foot injury but a thumb fracture. As I write this, there is talk he might not go on the DL, and it will depend on the swelling in his thumb recedes.

Lester was magnificent, allowing just one run in the first, and giving the pen a well-deserved day off. He struck out nine. Tim Lincecum lasted just three innings, allowing all four Sox runs, in the shortest outing of his career.

David Ortiz blasted a Lincecum pitch in the first for his 16th home run, and it landed in McCovey Cove. (I noticed the "Splash Hits" number did not increase after he hit it, so I guess they just count Giants who do that.)

The Red Sox added two in the second and one in the third, and Adrian Beltre completed the scoring with a home run in the ninth. The second run was on Jon Lester's first career RBI, a sacrifice fly to right (pictured) that might have been a grand slam in most other ballparks. The Red Sox limp back to Boston in second place, as Tampa Bay dropped another to Arizona, and the losing is making tempers boil over in the Rays dugout, with Evan Longoria wasn't too pleased to see B.J. Upton jog after Rusty Ryal's triple in the fifth inning.
Posted by The Omnipotent Q at 8:00 PM

Did "Jason" get hired as strength and conditioning coach? Did Hankenstein suddenly gain the ear of The Almighty? Wow...