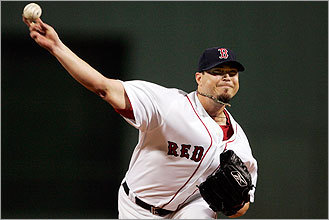 Josh Beckett looked really shaky in the first two innings of last night's game with the Indians, allowing four runs in the first two frames. He missed his previous start, so there may have been rust to shake off.

But the Red Sox picked him up, scoring one in the first on Dustin Pedroia's home run, and seven in the second, which included a grand slam by Victor Martinez. From there, Beckett went five innings, struck out five in getting his 17th win of 2009.

Paul Byrd pitched three innings after that, allowing a two-run homer to Shin-Soo Choo. In the eighth, Dusty Brown hit his first MLB home run, a blast over the Monster seats and into Lansdowne Street. The chants of "Dusty" filled the park as the catcher came out and acknowledged the crowd.

Dustin Richardson completed the ninth inning on the mound for the Sox, and then I realized something. If the Indians had a man on first in the ninth (they didn't, they went 1-2-3) who tried to steal, and Pedroia took the throw, it would have gone from Dustin (pitching) to Dusty (catching) to Dustin (second base). Wow, dust everywhere.

But then again, my mind tends to wander during blowout games at the end of the season.

Clay Buchholz will complete the season today for the Red Sox, as they get ready for the playoffs next week.
Posted by The Omnipotent Q at 11:21 AM