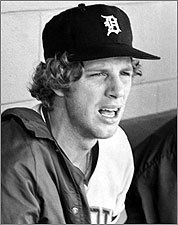 MLB suffered another tragic loss yesterday as Mark Fidrych was found dead on his farm in Worcester County, Massachusetts, in what appears to be an accident while he was working on his truck.

Nicknamed "The Bird" because of his curly hair and goofy grin, Fidrych exploded onto the baseball world in 1976 with the Detroit Tigers, winning 19 games and the AL Rookie of the Year Award. He is best remembered for a Monday Night Baseball game, which I remember watching, that June against the Yankees in which the country got to see him go through his rituals of talking to the ball and grooming the mound himself. He electrified the crowd in a 5-1 Tigers win.

He was definitely a character. He was the starting pitcher for the AL in the All-Star Game that year, and I'll never forget what he said when someone asked him about Thurman Munson, who was the starting AL catcher.

He was just a likeable, affable guy who no one had a bad word to say about. Unfortunately, injuries took a toll on The Bird, of his pitching shoulder and knee. He threw an amazing 250 innings in 1976 and that workload probably helped contribute to his short stay in the majors. By 1980, the Tigers released him after he won just 29 games. He tried to make a comeback with the Red Sox, pitching at Pawtucket in 1982 and 1983, but he never got back to the majors and called it quits midway through 1983. He went back to his farm in Massachusetts.

Here's more about Mark Fidrych from the Boston Globe.

Mark Fidrych was just 54 years old, and those of us who saw him play will never forget him. Thanks for the memories, Bird.
Posted by The Omnipotent Q at 11:10 AM