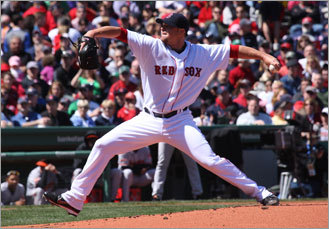 The Red Sox won their fourth straight game on Sunday with a 2-1 win over the Orioles. Jon Lester was back to his old form, pitching seven shutout innings, with Ramon Ramirez pitching a perfect eighth (he continues to be a find), and Takashi Saito got his first save of the year. Tito Francona decided not to use Jonathan Papelbon three straight days, and Saito allowed the Orioles a run before shutting the door by striking out Gregg Zaun to end it. It was the first series the Red Sox have won this season.

Lester struck out nine and dominated the Orioles all day. He was in trouble only once, in the fifth, when Baltimore had two on with no out. Japanese import Koji Uehara was Lester's opponent, and he pitched well, allowing both runs over six innings.

The Orioles were the perfect opponent for the Sox, as they have dominted them at Fenway Park the last four seasons, going 26-6 against Baltimore since September 2005.

The Red Sox will wrap up this four-game series tomorrow morning at 11 AM with their annual Patriot's Day game. Justin Masterson will make his first start of the season for the Red Sox.

Josh Beckett had his six-game suspension reduced to five games and began serving it today. His next start will be Saturday instead of Friday against the Yankees, and Jon Lester will start Friday in Beckett's place.
Posted by The Omnipotent Q at 10:22 PM

Q, this was a SWEET game, although with a couple nail-biting moments in the ninth. The one thing that will carry us FAR this season is the 'pen, maybe the best in the league. The pinstriped 'pen? Oops, I laughed out loud!!

We need six from Masty this morning...I can't wait.
Enjoy your day and be well. Pete

The pen has been superb so far and without doubt the best in the AL. Looking forward to watching some baseball this morning. Happy Patriots Day, Peter!