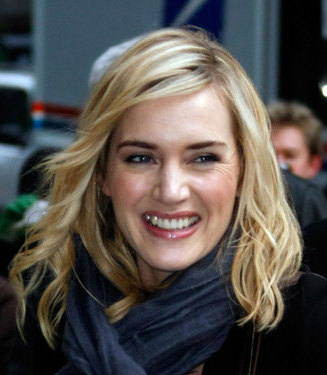 As I do every year, the only awards ceremony I watch with any enthusiasm is the Academy Awards. (I haven't seen one second of the Grammys Awards in decades. You'd have to tie me in a chair to make me watch those braindead nitwits. But I digress...) And I watched it last night. There were few surprises, and for me that biggest one was Sean Penn (my Facebook friend) winning Best Actor for "Milk" over Mickey Rourke in "The Wrestler." I thought for sure he'd win. Hollywood loves a redemption story, but I guess not this year.

But one winner that was no surprise to anyone was Kate Winslet winning Best Actress for "The Reader." I was really happy for her winning, and on her sixth nomination, Kate finally entered the Promised Land. (I haven't seen "The Reader" or "Revolutionary Road" yet, but I plan to.)

And good for her. I have been a big Kate Winslet fan ever since "Sense and Sensibility" and "Titanic." I knew it was just a matter of time before the Academy finally recognized what a terrific actress she is. Kate is the youngest actress ever to be nominated six times, at 33. (Kate was born on October 5, 1975, the day the Red Sox won Game 2 of the ALCS at Fenway Park over Oakland, and won the AL pennant two nights later. See, I can get the Sox into an article about Kate Winslet!) Kate also holds the distinction of being the youngest actress nominated twice, 3 times, 4 times, and 5 times.

As everyone knows, she achieved megastardom in "Titanic" but she did a smart thing by going the indie route right after the film hit. She did two small films, "Hideous Kinky" and "Holy Smoke" instead of roles she turned down, like in "Shakespeare in Love." (How the hell did that movie beat out "Saving Private Ryan" for the Best Picture Oscar?" What an injustice.) I was in the audience for both of its New York premieres, and Kate was also there in person as well.

I've followed Kate's career throughout this decade, with my favorite roles of hers being "Eternal Sunshine of the Spotless Mind" (it was funny seeing her on the Long Island Rail Road with Jim Carrey), "Iris" and "Little Children." She has a gift for doing foreign accents very well, and she has the American one down pat. Kate brings an intelligence to the screen, and a certain elegance, that I'll take over many of the bimbos on the Hollywood scene these days.

Meryl Streep now holds the record for Oscar nominations with 15 (Kate beat her out last night), but I can envision a day when Kate will challenge that record. She has such a diversity of talent, and I bet she takes another Best Actress Oscar down the road.

These days Kate makes New York City her home with her husband, director Sam Mendes and her two children. (She is the English girl I always hoped I'd meet. Oh well.) I offer her my congratulations on her long-awaited win, and offer the best for the future.

I'll be watching, along with millions of her other fans.
Posted by The Omnipotent Q at 12:15 PM

She's already spoken for, Steel. I don't go after married women. I don't want any angry husbands knocking at my door at 3 AM. So I'll just admire her from afar...