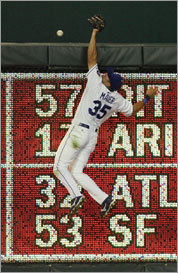 The Red Sox bounced back nicely last night from the difficult defeat of Monday night, as Jason Bay had four hits and Josh Beckett pitched 6 2/3 solid innings as the Sox won, 8-2 in Kansas City.

I watched the game on and off as I was hosting Trivia Night, so I can't really watch very closely. But I did see the ball that Jason Bay hit that I thought was going to go out. Royals centerfielder Mitch Maier had the ball hit off his glove (pictured) and it rolled along the wall until leftfielder Ross Gload knocked it down to the ground and held Bay to a double. (Jed Lowrie knocked him in with a RBI triple right after the play occurred.)

It just goes to show you that you never know what you may see at a baseball game.

It was a nice bounce back for Beckett, who had his worst start of the season last time against the LA Angels. He allowed just 2 runs on 4 hits, and struck out seven in getting his first win, his 10th of the year, in almost a month.

Jacoby Ellsbury also had a great night, as he had two hits and stole two bases. Those were his first steals in over five weeks. The Sox really need him to be more consistent, and be the offensive catalyst they know he can be.

The series concludes tonight with Tim Wakefield taking the hill against KC's Luke Hochevar.
Posted by The Omnipotent Q at 12:19 PM

JQ...I couldn't believe that another outfield fly ball, well hit, landed and didn't go into the promised land. Isn't that twice this year? I think I'm sure I've never seen that in one season before. Great comeback for Josh. VINTAGE JOSH. More, please???Go Timmy!!!

Colon had a setback...he was hammered yesterday. Buchholz it is...for now, until September, unless Masterson takes the hill soon.
All I know is this...Jason Bay has been great!

I doubt Masterson returns the rotation, as the Sox brass wants to keep his innings total down. Sorry to see Colon get whacked yesterday. I guess they will stick with Buchholz for now...always good to hear from you Peter...