A Nice Weekend In L.A. 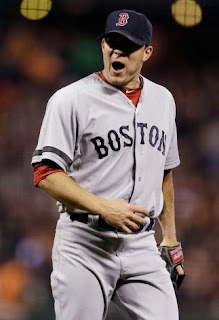 Going into this series with the LA Dodgers, I was hoping the Red Sox would win just one game, as it would make their trip to California a success, splitting the six games there.

The Sox came damn near close to winning all six games.

They manhandled the hottest team in baseball in the last 70 years, 8-1, on Sunday night. Jake Peavy was simply magnificent, pitching a three-hit complete game, and is 14-2 lifetime against Los Angeles.

And a big thank you to Ryan Dempster, as his suspension for plunking Alex Rodriguez last Sunday night meant they had to miss this series, and moved Jake Peavy up to Sunday night. (How do you think Dempster would have pitched against LA on Saturday had he had his regular turn? I don't want to think about it either.)

The Red Sox made some statement this past weekend. After the 2-0 loss on Friday night, they allowed Los Angeles just 3 runs, and only 5 in the series, on only 11 hits for the three games. The starters went 24 1/3 innings and allowed just 4 runs. The Dodgers have only been held to three hits in a game six times in 2013, and two of those times were by the Red Sox (Friday and Sunday).

And Carl Crawford and His Whining Big Mouth was held to three hits and two strikeouts in this series he "wanted to win so bad." Ha.

Mike Napoli is getting red hot, as he had three hits on Saturday, and hit a mammoth shot into the left field bleachers in the 9th inning. Shane Victorino and Jarrod Saltalamacchia also hit home runs on Sunday night.

The win means the Sox are now 1 game up on Tampa Bay, who lost to New York on Sunday. The Orioles remain 5 1/2 back in third place, and will open a three-game series against the Sox on Tuesday night.
Posted by The Omnipotent Q at 11:34 PM