Never Over Until The Last Man Is Out: Credo of the 2013 Red Sox 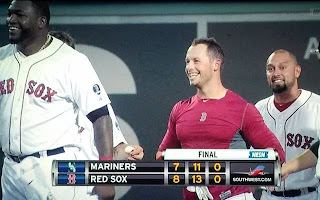 If Henry Blanco hits a grand slam, it simply isn't your night, especially with Felix Hernandez on the mound. So I went to my computer and started writing next week's Trivia questions and answers.

It was 7-2 in the 9th, and the Comeback Kids struck again. I went off the computer and jumped back to my TV when it was 7-3.

The Red Sox scored six in the ninth to sweep Seattle, culminating with Daniel Nava's single with the bases loaded. It is now the 11th time the Sox have won in their last at-bat at home this year, and that leads the MLB.

Stephen Drew won Wednesday night's (Thursday morning actually) with a hit with the bases loaded in the 15th inning. So the Sox won it in the final at-bat twice in one day!

And tonight's win was eerily similar to what happened on April 10, 1998, which was Opening Day at Fenway.

The Sox were also down 7-2 to the Mariners going into the 9th. Randy Johnson left with a five-run lead (Hernandez left after seven innings up 7-1.), and the bullpen also imploded that day. The Sox scored seven that day, which ended with Mo Vaughn's grand slam to make it a 9-7 Red Sox win.

The Red Sox are now 1 game up on Tampa Bay, who were idle on Thursday night.