Yeah, Now Bring On The Yankees!! 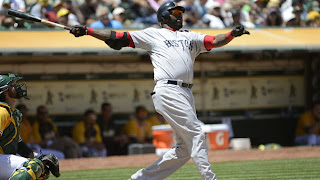 A thoroughly embarrassing West Coast trip ends with another lackluster performance by the Red Sox offense, 3-2. They were crap all seven games, scoring just 14 runs in 7 games.

Another game where they turn another young pitcher (A.J. Griffin) into a guy who looks like he's in the running for the Cy Young Award. Aaron Cook wasn't bad for the Sox, going 6+ innings, giving up all three runs. (The ex-Sox combo of Coco Crisp, Brandon Moss and Josh Reddick were murder in this series, hitting four home runs and driving in nine. Moss hit second one of the series today.)

Just three bloody hits today. One was the 400th home run in David Ortiz' career. Congratulations to the Large Father on reaching another milestone.

On Papi's next turn at the plate after the homer, the A's PA announcer said he had hit his 400th home run in the previous at-bat. Folks gave him a nice standing ovation. Lots of Red Sox fans in the stands, but the A's fans showed some real class giving Ortiz the standing O.

New York won at St. Pete, and that drops the Sox down to 7 1/2 back in the AL East. Now New York comes to Fenway for four with the Red Sox this weekend. As you can guess, I'm not loaded with optimism that the Red Sox will gain any ground by the time the break starts on Sunday night.

When does the NFL season begin again?
Posted by The Omnipotent Q at 7:28 PM