Dignity Returns (For a Day) 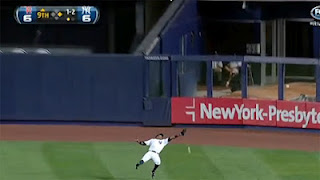 Jon Lester went out there on Saturday evening at "iconic" Yankee Stadium and was decent. Nothing great (6 innings, 4 earned runs), but was miles better than his last start last Sunday. (I put iconic in quotation marks because I recently heard that den of inequity referred to by that moniker. How can any stadium that has been opened just 3 years be "iconic"?) Lester needs to build on this start.

Adrian Gonzalez continued his hot hitting with a three-run shot and 3 hits, Will Middle brooks doubled in two in the first and Pedro Ciriaco had three hits, scored three runs, and had the crushing blow of the game in the ninth with the score tied: a fly ball that Curtis Granderson totally butchered that allowed Jacoby Ellsbury to score the go-ahead run. Ciriaco then scored on Dustin Pedroia's sac fly. (With thanks to Surviving Grady for the pic.)

The Sox blew a 6-1 lead, and it was capped by Mark Teixeira's two-run home run off his former buddy Vicente Padilla. Horse Face took his sweet time getting out of the batter's box, admiring his home run. Their next meeting should be must-see TV, no?

Can't get overly excited about this win. Happy for the win, but the Red Sox need to go on a tear like the Oakland A's are on right now (18-3 in July) for this to have any meaning. They've driven us bananas all year with these small winning streaks, only to give it back.

A win tonight would be a good start. But even that wouldn't have me jumping for joy. I really doubt this team has an 18-3 run in them.

Prove me wrong guys.
Posted by The Omnipotent Q at 11:31 AM