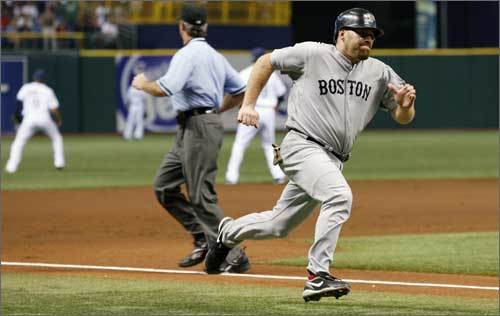 The Red Sox opened the rubber game of last night's Tampa Bay finale with two runs in the first inning, but Clay Buchholz gave it right back in the bottom of the inning, and it looked like a shootout might be developing. But it never materialized.

Buchholz settled down after the rocky first, allowing just one more run over a total of six innings. Kevin Youkilis was last night's hitting star, as he had three hits, drove in one and scored two.

The bullpen was again terrific, as the combination of Billy Wagner, Daniel Bard and Jonathan Papelbon had a combination of five strike outs, two walks and no hits allowed. It was the fourth win of the season for Buchholz, and the first against a team not called the Toronto Blue Jays. The Rays are for all purposes done, as they now trail the Red Sox by six games in the Wild Card chase.

It was the first series win by the Red Sox in Tampa since September 2007.

The Texas Rangers had an off day, so the Red Sox expanded their Wild Card lead to three games. The Sox are now off to Chicago for four games with the slumping Chicago White Sox. Paul Byrd will open tonight's series, and a decision will be made today on Tim Wakefield's back, and whether he will be able to start Saturday's game. If he can't go, Junichi Tazawa will make the start.
Posted by The Omnipotent Q at 11:39 AM