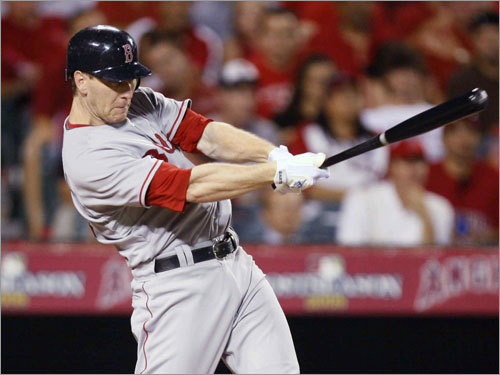 Jason Bay hit a long two-run homer in the sixth as the Red Sox drew first blood in their ALDS series with the LA Angels and went on to a 4-1 win.

So much for the Angels owning the Red Sox this season. LA had won 8 of the 9 meetings during the 2008 regular season. But remember, the postseason is a new season. (I can't help but remember the Mets taking 11 of 12 from the Dodgers in 1988, but lost the NLCS in seven games that year. Anything can happen.)

Professor Thom's was jammed last night as another Red Sox postseason got underway. Jon Lester was nothing short of magnificent, pitching seven tremendous innings and allowing just an unearned run on a Jed Lowrie error in the third. I felt badly for Jed, as he's played terrific defense all year and muffed an easy grounder that Vladimir Guerrero hit that should have ended the inning. He would have worn the goat horns had the game ended 1-0. (Guerrero turned out to be one of the goats in the end, as his idiotic baserunning in the eighth ran the Angels out of the inning.)

John Lackey was excellent the first five innings, allowing just two hits, which included a double to leadoff the game by Jacoby Ellsbury. The Red Sox left him at the third without getting him in. Lester had trouble in the first, loading the bases with two outs but got a grounder to Mike Lowell to end the threat.

Bay connected with two outs in the sixth, and Lester took over from there. He has firmly established himself as an ace, as he no longer looks like that pitcher we fretted over who seemed to nibble and nibble and always got his pitch count to 100 by the fifth inning. The Angels simply couldn't touch him last night when it really mattered, and he struck out seven while throwing 117 pitches.

Ellsbury had a superb night, as he looks like the guy who exploded in last year's postseason. He had three hits, and made an excellent sliding catch off Mark Teixeira in the eighth. In the ninth, the Red Sox added two runs on a single by Lowrie, a sacrifice by Jason Varitek, and RBI single by Ellsbury, a stolen base and an RBI single by David Ortiz.

Daisuke Matsuzaka gets the ball tomorrow night in Anaheim against Ervin Santana. The Red Sox have accomplished at least what they set out to do: earn a split in Anaheim. Let's see if they can come back to Fenway with the opportunity to do what they've done to the Angels on two other occasions: pull off a sweep.
Posted by The Omnipotent Q at 10:42 AM

I am going out on a Limb to call it a Red Sox Dodgers World Series:

The Key Factor is Manny but even the Dodgers Bullpen is a bit frayed, because I don't hold Broxton in that high a regard as a closer.