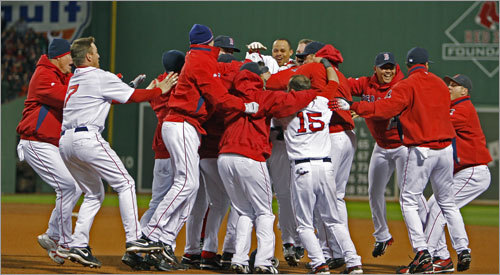 Ah, those on-field celebrations by the Red Sox at Fenway Park. I never get tired of seeing them. Especially when they've come in such an abundance in recent years.

Jed Lowrie had a chance to be a hero in Game 3 of the ALDS on Sunday night when the score was tied with bases loaded and two outs in the tenth inning. But he flied out and the Red Sox wound up losing in the 12th.

But had a great chance last night in the ninth with the game tied and the winning run at second. And this time he hit the first pitch from Scot Shields to right field for a hit and Jason Bay came in just ahead of the tag to give the Red Sox a dramatic 3-2 win and send them to an ALCS showdown with the Tampa Bay Rays beginning on Friday night.

Jon Lester pitched seven fabulous innings, and gave up no earned runs in his two ALDS starts. He clearly deserved a win in this game and would have been series MVP (if there was one in the ALDS). But the bullpen let the game nearly get away, as Justin Masterson walked one, threw a pitch that crossed up Jason Varitek (ruled a passed ball but it was Masterson fault) and then allowed a Torii Hunter single that tied the game at 2. Terry Francona seems to have fallen in love with him in the eighth inning setup role, to the detriment of Manny Delcarmen. Don't ask me why, as MDC has been very good down the stretch.

The Red Sox scored two in the fifth, as Jacoby Ellsbury, with runners at first and third and one out, hit a grounder to Howie Kendrick, who muffed the ball but got Ellsbury at first as the first run scored. It wouldn't have been a DP as Ellsbury would have beaten the throw to first easily on a relay. (It didn't stop John Lackey from showing up his teammate with his body language though). Dustin Pedroia finallybroke his 0-for-15 slide with a double off the wall to bring in Jason Varitek to make it 2-0.

In the ninth Masterson gave up a double and a sacrifice bunt to put a man on third with one out. Erick Aybar attempted a suicide squeeze but failed to bunt, and Jason Varitek ran Reggie Willits back to third and tagged him out. He lost the ball after falling to the dirt but the ump still signalled out. (Remember the old football adage: "the ground can't cause a fumble.") In the bottom of the ninth, Bay hit a ball that Willits totally misplayed into a ground rule double. He should have taken it on a hop and held Bay to a single. Mark Kotsay, who had a clutch single in the fifth and made two sparkling catches at first, lined out to Mark Teixeira. That brought up Lowrie, and on the first pitch sent everyone home happy and set off the champagne celebrations.

Lester is now the unqualified ace of the Red Sox staff. He pitched one whale of a game and is still undefeated at Fenway this season. He probably won't start Game 1 of the ALCS, as it would be on three days rest. (Daisuke Matsuzaka will probably get that honor.) Lester has now pitched 22 consecutive scoreless innings in the postseason, the second longest streak ever by a Red Sox pitcher. (Babe Ruth has the longest, at 29 innings.)

The Red Sox have now beaten the Angels 3 of the last 5 postseasons, and 11 out of the last 12 meetings. Just goes to show you that the regular season meetings mean little in the postseason, as LA dominated that 8-1 in 2008.

Now the matchup we've all been waiting for will start on Friday night. An ALCS date with the archrival Tampa Bay Rays. Should be a lot of fun.
Posted by The Omnipotent Q at 9:53 AM