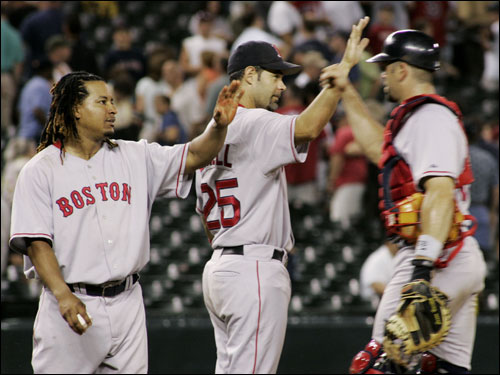 The Yankees lost again in Toronto, 7-3, so that now puts the first place Red Sox 3 1/2 games up on New York. They better watch out, as they are only a half-game ahead of the Blue Jays.

I watched the game at Professor Thom's as my friends Gareth and Kim were jointly celebrating their birthdays, which are very close to each other. Fun was had by all as the Sox led from start to finish, as Big Papi got it started with a first inning home run. The only negative on the night was Craig Hansen allowed two runs in his second inning of work. Hansen more and more looks like just a one inning pitcher. He was sharp in the sixth, getting the Mariners 1-2-3, but he struggled as soon as he began the seventh.

Good news as David Wells pitched a strong 50-pitch bullpen session before the game, and he's scheduled to pitch another in Oakland on Monday. He is on schedule to return against either Cleveland or Kansas City earlier next month. It will be interesting to see if Theo Epstein goes out and gets another starter by July 31. I think he would be wise to do so, as you can't count on Wells right now. They counted on his return in April, so much so they traded Bronson Arroyo to Cincinnati.
Posted by The Omnipotent Q at 1:12 PM

Greets to the webmaster of this wonderful site. Keep working. Thank you.
»