Pitching Is The Name Of The Game 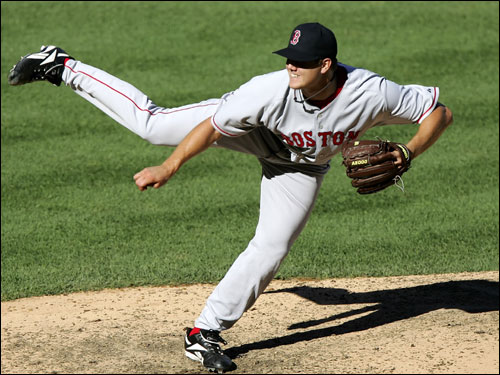 The Red Sox had a fabulous weekend in Baltimore, sweeping the O's by scores of 14-8, 2-1 and 4-1. My friends Gareth, Kim and Darryl all took in some of the action down there live, and I'm sure they all had a great time. The Red Sox are now 5-1 and sit atop the American League Eastern Division. A lot of positives came out of this weekend, but no more so than in the Red Sox pitching situation.

The Sox got three quality starts from Curt Schilling, Matt Clement and Tim Wakefield. It looks like the old Schilling may have returned, as he has surrendered just three earned runs in his first 14 innings of work. Clement was terrific on Friday night, allowing just two hits to Baltimore in six innings before he tired in the seventh and gave up four runs. Wakefield bounced back nicely from the pounding he took last Tuesday night in Texas, giving up just one run on Sunday in six innings of work. His catcher Josh Bard also had a good game after the nightmare he endured on Tuesday as well, not allowing any passed balls and looked much more comfortable catching the Wakefield knuckleball.

But the best news now many the emergence of Jonathan Papelbon (pictured above) as the Red Sox closer. He has gotten three saves in three chances, and was devastating in his first two opportunities. He allowed two baserunners on Sunday, but pitched out of the jam to get save number three. Papelbon continues to impress mightily. He has incredible poise and guts for a pitcher his age, and Terry Francona is clearly not in the least bit afraid to use to him to close the pressure games.

Keith Foulke has looked better his last two appearances, including an eighth inning stint on Sunday, when he struck out two in retiring the side in order. Foulke appears to be the "good soldier" in that he has not complained about not being the closer, but you figure he will get opportunities to do his old job somewhere down the line. More outings like today and Francona will not hesitate about using him in the ninth again. The challenge has been placed in front of Foulke, and we will see how he responds to it.

It is an excellent sign for the Red Sox that they are winning many low scoring, close games (three so far: 4-1, 2-1 and 2-1). We know the Sox will hit and score plenty of runs. The pitching has gotten off to a whale of a start, and if Schilling and Foulke are both dependable again, there may be no stopping the Red Sox this season. The press can go on forever about the Yankees and their "Murderers Row II" offense (yeah, right), but if they don't pitch well or play good defense, they'll never make the playoffs. How many times have we seen the Sox have the AL's best offense but the pitching just wasn't that good and they came up short? (Way too many in my estimation.)

Seeing Mr. Papelbon dominate the last few games, I can't help but think of that immortal line that was once used to describe Bruce Springsteen by Jon Landau (changed ever so slightly):

"I have seen the future of the Boston Red Sox, and it is Jonathan Papelbon."
Posted by The Omnipotent Q at 7:36 PM