What, No Mention Of My Trivia Night? 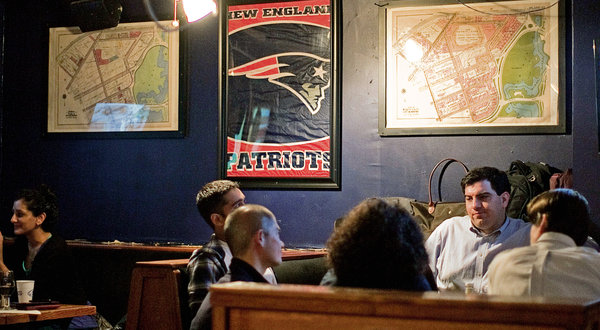 The New York Times today has an article about Professor Thom's and the upcoming Super Bowl. The Times reporter was in the bar last Tuesday night, as my Trivia Night was going on. He was taking pictures of the bar, the Trivia folks and even me as I was doing the Trivia.

And there's not a mention of Trivia Night anywhere in the article. Very disappointing.

But the picture here is of some of my Trivia regulars. OK, not a total loss. Here's the article.

Also, my friend Pete Nash has an interesting new article up at Hauls of Shame about an auction house in Dallas that is selling a 19th century baseball contract that was stolen out of the New York Public Library, and that the late Barry Halper was behind a heist of items stolen from that very institution.

And a very Happy 60th Birthday to the great Fred Lynn: