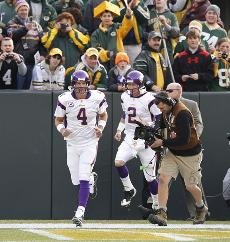 It was the game everyone was waiting for, and Vikings as well as Packers fans had circled for weeks. Brett Favre made his return to Lambeau Field on Sunday, and the reaction was what you might expect: a mixture of cheers and boos, but it was mostly negative. There were Packers fans with pro-Favre signs up, amid the "Judas" and "Traitor" ones from the Cheeseheads.

Favre made his return to Green Bay a truly memorable one as the Vikings swept the season series from Green Bay with a laugher that turned into a nail biter at the end, 38-26.

Favre tossed four TD passes, and the Vikings led 17-3 at halftime. And they came out with a TD early in the third quarter and it looked like a Vikings cakewalk was at hand.

The Vikings stopped Green Bay cold in the first half, allowing the Pack just 47 yards. But after it was 24-3, GB came alive. They capitalized on a Vikings fumble on a kickoff and converted it into a TD, and scored another late in the third to make it 24-20. I started to have a bad feeling about this, as the Packers had some big time momentum and the Vikings defense looked like it did during that near-collapse against Baltimore a few weeks back.

Favre led the Vikings to an early fourth quarter TD, a two-yard pass to Jeff Dugan. But the Packers answered it back with a TD from Aaron Rodgers (who was spectacular in the second half) to Greg Jennings. But a two-point conversion was stopped by the Vikings' Kevin Williams to keep it a five point lead.

The Vikes iced the game just inside two minutes, as Favre threw TD number 4 to Bernard Berrian to complete the scoring, aided by a 33-yard run by Adrian Peterson to set it up. Overall, Favre was 17-for-28 for 244 and 4 TDs.

No matter where you stand on Brett Favre, you have to admit it was one hell of a memorable game. For the 7-1 Vikings it was a gargantuan win, as they now pull 2 1/2 games ahead of both Green Bay and Chicago, who are 4-3.

The Vikings now get the off week next week, and will return to the Metrodome on November 15th to play the last-place Detroit Lions.
Posted by The Omnipotent Q at 9:06 PM