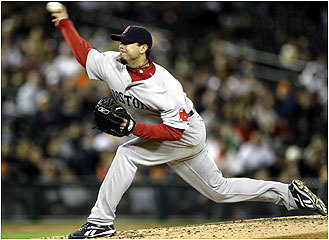 It was one wacky night in Detroit last night.

Josh Beckett pitched one of his finest games in a Red Sox uniform, walking Placido Polanco in the first and then retiring 18 straight. He dominated the Tigers all night long before allowing a single to Curtis Granderson in the seventh to break up the no-hit bid. (I was watching the Detroit feed on Extra Innings and they were patting themselves on the back after the hit for putting the whammy on Commander Kick Ass by showing the scoreboard with the Tigers having no hits seconds before the hit. OK, guys. Whatever works, I guess.)

No-hitter would have been nice, but I was glad to see the old, dominant Beckett back in 2007 form.

The Red Sox staked him to an early 2-0 lead on J.D. Drew's homer in the first and added two more later in the fifth. In the eighth, the Sox busted it wide open, scoring six runs, all on hits which included a two-run double by David Ortiz. It looked like it was all over, until the Sox looked like the Keystone Kops in the bottom of the inning. Three of the four infielders made errors, five runs scored and they were all unearned. Kevin Youkilis left with a bruise on his ankle, as he was clipped by Josh Anderson, who reached out for the first base bag with the wrong foot and caught Youk. He left the game but is expected to play today. And Mike Lowell was ejected in the top of the ninth for giving home plate ump Bob Davidson a piece of mind about a strike call after his at-bat ended.

Takashi Saito struggled in the ninth, loading the bases and Terry Francona had to get Ramon Ramirez and Hideki Okajima up in the pen. It was starting to get a little uncomfortable until Saito got Anderson to fly out to end it.

The win guarantees the Red Sox at least a .500 record on the ten-game road trip, which concludes this afternoon at 1 PM, with Tim Wakefield on the mound.

The Red Sox are now tied with New York again for first place, as they lost last night to Texas, 4-2. And Yankee fans love affair with their reborn Knight in Shining Armor seems to be wearing off.
Posted by The Omnipotent Q at 11:20 AM