Looking For Payback at The Trop 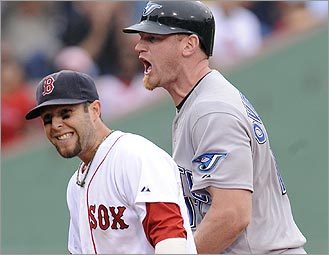 Jon Lester continued his dominance yesterday, allowing the Blue Jays just one run on four hits in eight innings as the Red Sox pulled to within one game of the AL East lead with a 4-3 win at Fenway.

Before the weekend began, I thought the perfect scenario would be the Sox winning three out of four and the Rays dropping two of three to the Yankees. And lo and behold, the Yankees actually cooperated (boy was it weird not rooting against them), and now we see a three-game showdown between the Sox and Rays beginning tonight.

Lester won his 15th game and outdueled Roy Halladay. He gave up a first-inning homer to Jose Bautista and that was it. The Red Sox scored runs in the first and second, and Coco Crisp had two key RBI. David Ortiz hit a rare triple in the eighth that Alex Rios misplayed and scored on Kevin Youkilis' sac fly.

It proved to be huge as Jonathan Papelbon had a very shaky ninth. He allowed three hits, and one was a controversial single that Lyle Overbay tried to stretch into a double but was called out (pictured). The replays seem to show the ump got it wrong, and it curtailed a big inning. Papelbon was relying to much on his fastball and the Jays were hitting him. He had a solid outing on Saturday night, and no one with the Sox seems worried about yesterday's tightrope walk.

Speaking of walking tightropes, Daisuke Matsuzaka takes the hill in Tampa tonight against the Rays, and will be followed by Josh Beckett and Tim Wakefield in the series. If the Red Sox take two of three at The Trop (matching what Tampa Bay did at Fenway this past week) they will be tied with the Rays on Wednesday night. The Red Sox also cut their magic number for a playoff berth to 8 as Minnesota lost in Baltimore, 7-1. They now lead the Wild Card by six games.
Posted by The Omnipotent Q at 11:10 AM