The Long Worldwide Trek Is Over 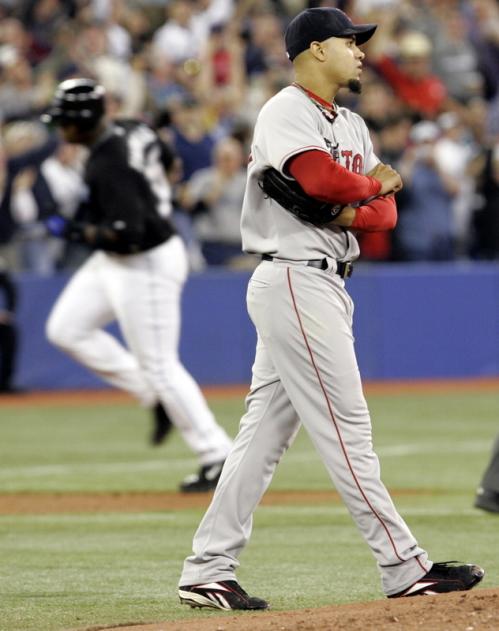 The Red Sox are finally back in Boston, as the three-nation, 19-day trek for the club came to a crashing end in Toronto on Sunday afternoon, where the Red Sox were swept by the Blue Jays, 7-4, in an afternoon to forget.

Josh Beckett pitched pretty decently over 4 2/3 innings before being lifted for Manny Delcarmen. MDC came in with the bases loaded and threw a first-pitch fastball to Frank Thomas, a pitch that screamed, "Hit me over the wall." And Thomas did just that, and put the game away at 6-2. Jacoby Ellsbury, J.D. Drew and Jason Varitek all had solo home runs in the losing cause.

The bullpen was awful this weekend, and it cost Kyle Snyder his job on the Sox, as he was DFA'd yesterday. The starting pitching was actually pretty good, but the defense was lousy on Sunday. Julio Lugo made three errors, and Mike Lowell made one. It was the first four-error game by the Sox since last April.

The Red Sox looked tired, as the trip across the globe had taken its toll. They are now 3-4, and have the day off Monday before opening the home season against Detroit, and raise the championship flag at Fenway on Tuesday afternoon.

Welcome back to Boston, guys.
Posted by The Omnipotent Q at 10:10 PM