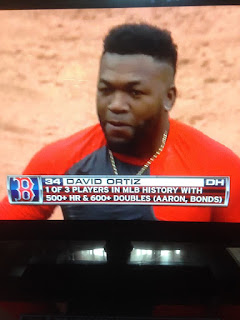 The legend of the Big Papi added a new chapter on Saturday.

David Ortiz saved the Red Sox' bacon for the upteenth time yesterday, as he tripled in the tying run in the ninth inning, and doubled in the game winner in the 11th as the Sox came from behind to beat the Houston Astros, 6-5 at Fenway.

It was an historic day for Big Papi. It was his 20th game-winning RBI from the 9th inning on (the so-called "walkoff" win), and he joined the elite club of being just the third player in history to get 600 doubles and 500 home runs in a career. (The others being Hank Aaron and Barry Bonds).

Papi also hit a double, a triple and a home run (which he did earlier in the game) in a game for the first time in his career. (He's never hit for the cycle.) He now has 10 home runs on the year, and is ending his storied career on an incredibly high note.

Once again, David Ortiz added to his Hall of Fame resume with a dramatic hit to win a game. He should be a mortal lock to enter Cooperstown in 2022. But still, I'll bet you he will NOT be elected on the first ballot, as there are idiots who will hold the fact he is "only" a designated hitter, so that should preclude him from election. (And don't get me started about that alleged PED crap.)

The overwhelming majority of position players in the Hall are there for their offensive production. There are a few who aren't, like great defensive players like Brooks Robinson and Ozzie Smith. They definitely belong, because they are the very best at their positions all-time. There are also great offensive players who were awful defensive players, like Reggie Jackson and Ralph Kiner. Nobody ever said they should be kept out because they were terrible in the field.

It's time for these muttonheads to come into the 21st century and acknowledge that great offensive players like Papi and Edgar Martinez belong in the Hall, even if they spent little time on the field.

OK, enough of that rant. (And I know I'll be ranting more and more about this in coming years.)

Jackie Bradley extended his hitting streak to 20 games in the win. And have we finally had enough of Clay Buchholz? Another poor start, as he put the Sox into a 5-2 hole in the second, giving up his second grand slam of 2016 to George Springer. With Joe Kelly and Eduardo Rodriguez both on rehab and due back shortly, the Sox have a serious question to answer about Buchholz. Do they do what the White Sox did with John Danks a couple of weeks ago and DFA him? He's leaving the team with little choice.
Posted by The Omnipotent Q at 12:26 PM

A game winning RBI isn't necessarily a walk-off. If it came in the top half of the inning in an away game, it isn't considered a walk-off.

The Omnipotent Q said...
This comment has been removed by the author.
10:26 AM

You can only get a so-called "walkoff" RBI at home, obviously. I just neglected to finish the sentence with the words "at home." Sorry about that.