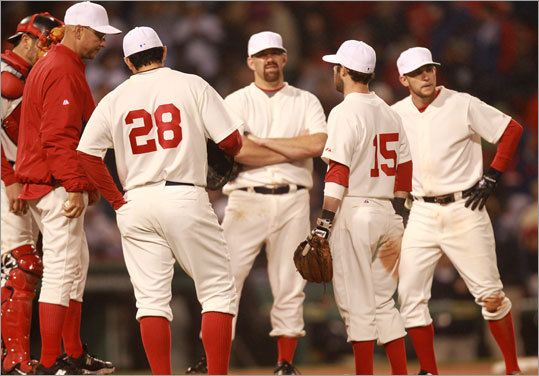 I got home in time after softball to put on the radio with the Red Sox holding a 3-1 lead after the bottom of the 7th. Alfredo Aceves gave the Sox five solid innings and David Ortiz deposited a Carlos Zambrano pitch into the Monster seats.

Then came an absolute shitstorm of an eighth inning. Eight Chicago runs, three Red Sox errors (I am beginning to believe Jed Lowrie isn't a fulltime MLB shortstop), a big meltdown by Matt Albers (who has been generally good so far) as Daniel Bard got the night off after having a heavy workload the last few weeks.

The Red Sox would have gone into first place had they held the lead and won.

I finally got a chance to see the throwback uniforms on the ESPN highlights after the game was over. As Allan points out at Joy of Sox, they weren't the 1918 uniforms per se (of course, no teams wore numbers in 1918), but some of the Red Sox players liked them.

Allan also has a great column (via Nick Cafardo in the Globe) about the "quiet" that returned to Fenway last night with the 1918 throwback game, as a lot of the canned noise that assaults fans was noticeably missing. Let's hope the Red Sox do this return to baseball the way it was a little more often.

And my pal Jere has some great pix on the festivities last night as well, as he was there live and in person.
Posted by The Omnipotent Q at 11:23 AM

Cubs GM says Francona was their choice to be manager.
http://www.nesn.com/2011/05/cubs-general-manager-jim-hendry-says-terry-francona-was-favorite-for-manager-job-in-2003.html

FOX had no coverage here, either. I listened to the game for seven innings on WTIC AM 1080 but fell asleep before the eighth started. In retrospect, a blessing, I guess, but hearing score wise what happened this morning was tough. We need Wakes tonight.

I was hoping that a classic Cubs-Red Sox match up would be on the tube out here in CA, but it was trumped by the Giants-A's Battle of the Bay. I should consider myself lucky.

Hey MQ! We've got a Dylan tribute band,
Planet Waves, and we're headlining a Dylan 70th birthday party this week. The last song of last night's rehearsal- The Mighty Quinn! I'll send you a link to the show once it's been posted.

Hey Dave: look forward to hearing your version of "The Mighty Quinn!"