You Know What Happens When You Assume 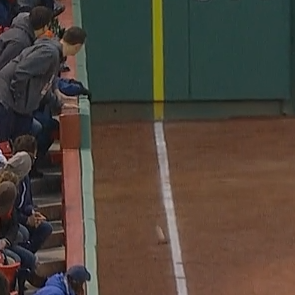 John Farrell set a new record last night, one that will never be broken.

He challenged a call on the very first pitch of the game.

Nick Markakis hit a fly ball that landed just inches foul down the left field line. But ump Will Little called it fair. Farrell rightly called for the replay, and after a nearly four minute delay, the crew in NY upheld the decision.

From the still shot (courtesy of The Joy of Sox), it is clear the ball never touched the foul line. But it did kick up dirt that landed on the line. I can only guess they assumed the ball actually touched part of the line.

You know what happens when you assume. Ask Felix Unger:


And sure enough, Markakis scored on a single, and the Orioles went on to an 8-4 win.

MLB still has a serious problem with incompetent umpires, and now a replay system that can't get the calls correct. Very embarrassing.

The Red Sox continue to struggle with men in scoring position, leaving the bases loaded in the second, and left  two runners on in both the fourth and fifth innings. John Lackey was not sharp for a second straight outing, and the offense couldn't come to his rescue.